A downloadable game for Windows, macOS, and Linux

Unlike most text adventure engines, there are very few global commands.
No matter where you are, you can issue the command:

... to display what you are carrying. Similarly, to inspect the state of carried items, issue the command:

... and the game will display the state of items that have one.

The engine supports compound issuance of commands (doing more than one thing at once) by separating commands with "and" or "then".  You can even use ", and " or ", then " as separators for this purpose.

If you get any quests, you can check their status with the commands:

All other commands are specific to each room of the adventure.
Good luck and have fun!

Adventure files are plain text files, with a .tap extension, in the format described below.

All adventure files must have a room called main. This room must have a command called start, whose result must be the name of a room - this room will be where game play begins. The main room must also have, as the first line after the room name, a welcome message for the entire adventure (which can be blank).

Rooms can also have commands that trigger a special result. There are 2 basic commands:

command2=[kill A message to display when the player dies]

The warp command takes as its only argument the name of the room to warp to.
The kill command terminates the adventure and displays the message following.

There are a variety of commands to support inventory:

A global command - show items - is available (this command works no matter what room you are in, and displays the contents of your inventory).

The grab command adds an item to your inventory, if you don't have it already.
The have command is used for branching on whether or not an item is in inventory.
Have commands can NOT be nested. The = signs before any text or special commands are required. The special command can be any other non-inventory-related command, or the gain, lose, or oncegain commands.

[circle]
tryme=This is some text to chain. && This is a second line of text.
... rest of adventure file goes here ...

The grab and have commands can also take multiple items as an argument, separated by " & " (without the "quotes"). This tells the parser to proceed only if ALL items named are present in inventory, and fails the test otherwise, in the case of a have command. Grab commands work differently with this enhancement: instead of failing if ANY of the items could not be grabbed, they fail only if NONE of the items named could be grabbed.

Two more commands for working with inventory exist for one-time operations, the drop and lose commands. Multiple items can be listed in a drop or lose command by separating each one with " & ", just like grab and have commands. Drop and lose commands succeed if ALL named items are present in inventory, and fail otherwise - much like how have commands work. Drop commands also have two messages following them, just like grab commands do. The first one is displayed if the drop succeeds. The second is displayed if the drop fails. If the drop or lose succeeds, ALL listed items are removed from inventory. Unlike drop commands, lose commands do not display any messages upon success or failure - they just remove the item(s) from your inventory - and are therefore safe to use in have command results.

Input stripping will be performed next, before any command processing takes place. The game strips "go" and "travel" as prefixes, "a", "an", "the" and "to" in the middle of commands, and punctuation at the end. It also strips the command start and end delimiter characters "[" and "]", as well as the result delimiter "=". Finally, it converts double spaces into single spaces and removes extra spaces.

Synonym substitution will be performed after input stripping, but before any command processing takes place. The words that are substituted in the user's input are determined by a synonym table, located in a room whose name is the value of a command in the main room called "syntab". The synonym table's format is like this:

If the syntab= entry is omitted from the main room, synonym substitution will not be performed.

An example will help clarify:

The keywords are substituted for anything else in the same line in the table. If the user types "n", the game will understand this to mean "north", by looking up "n" in the synonym table.

Compound commands will be understood by the input parser as a chain of commands separated by "and" or "then", and will be executed in the order entered.

Objects whose state needs to be tracked, but are not in inventory, can be done via the commands check and alter.

The alter command modifies the state of an object, adding it to the list if it does not exist already. The check command behaves very much like the have command does for inventory, except that it works with object states, instead. The alter  command supports modifying multiple objects at once - list each object then its new state, in pairs separated with spaces. Note that the = signs are REQUIRED for both results of a check command.

Quest support exists too! To start a quest:

Marking a quest as completed:

... and the most complex of them all, checking quest status:

The usual rules apply for the required = signs, and you can use special commands in the results, as well as chaining. Status checks cannot be nested.

Quests can have an integer progress value assigned to them. This is controlled with the following commands:

Note: Quest progress is intended to range from 0 to 10000, but is not limited
to these values.

To check the value and branch:

Fittingly, there is a global command for users to see their quests too:

... as well as a global command to show details:

This lists each quest and its progress value, in the form:

Have fun making your own adventures! 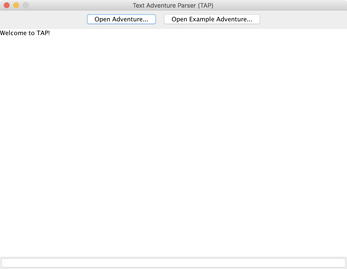 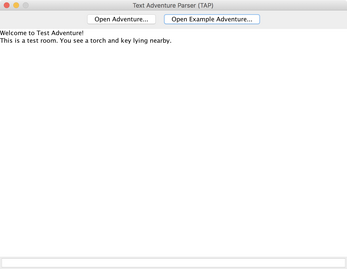 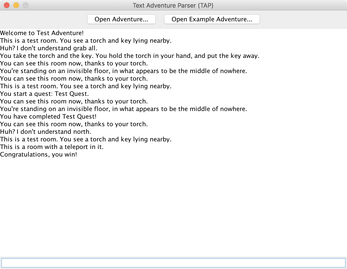